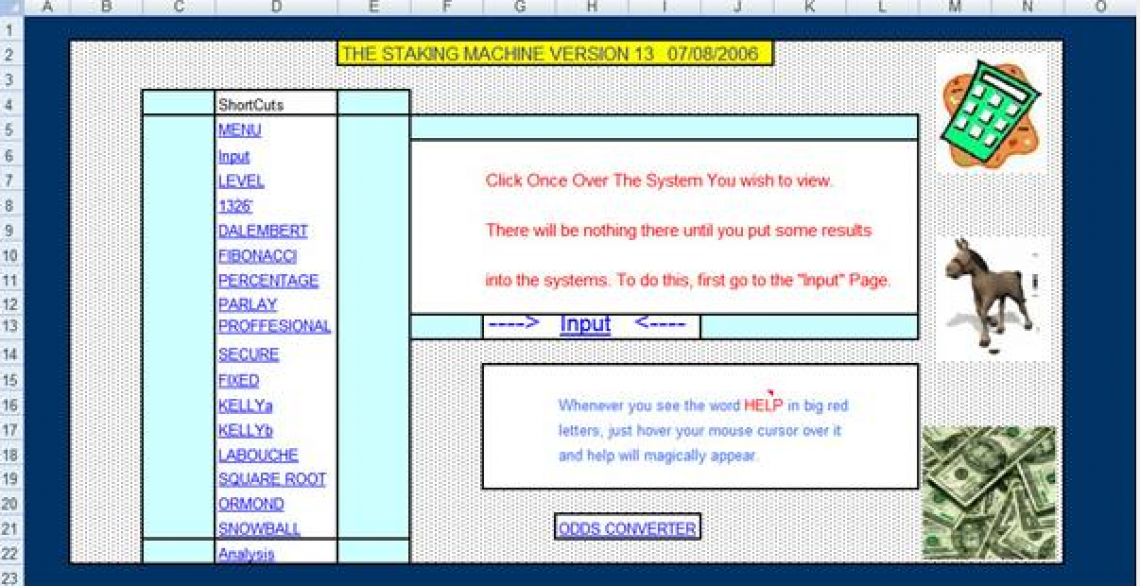 It was in July 2005 that the idea of The Staking Machine was first born. My own interest in learning and researching maths, statistics and all things betting meant an Excel Spreadsheet was created. Initially this was a simple spreadsheet used for backtesting various betting systems I wished to develop and use. But as the months passed the spreadsheet grew rapidly in size and complexity. A year later this spreadsheet included 14 staking plans and could back test 5000 selections. At that time it was called The Staking Machine Version 13 !

I realised that there were other like minded people out there who could really use what I had created to their benefit. But the spreadsheet was cumbersome. I don’t care what anyone says. As wonderful as Excel is, it IS cumbersome. If i was going to publish The Staking Machine it would need to be a standalone program.

A post was placed on the rentacoder website for the spreadsheet to be converted to a standalone program. After substantial cost and several months the first ever version was produced. This was Visual Basic 6 based and was database driven. The installation was cumbersome and was certainly not user friendly. Disappointed with the results I wrestled with starting again and asking a new coder to try something else. But in the end I came to the same conclusion. I had to do it myself ! I knew what I wanted to do and I could not afford to hire anyone else. So I learnt VB.NET and avoided databases where possible.

By December 2006 the first version of TSM was uploaded for end users to download and enoy. I say enjoy – I mean rip to shreds. The initial price was £14.99 with the aim to recoup all the losses incurred and if successful develop into a fully fledged piece of betting kit.

This first version had a separate screen to enter bet details. It also had the ability to link TSM directly to Excel so that you could update the excel sheet and not TSM. This feature was strangely soon ditched !

In early January 2007 the first copy of TSM was sold. The initial feedback shaped the rapid development in that year. Development was fast paced. Through trial and error I learnt more VB.Net code and managed to put the data entry and the results onto the same screen. Once this was done the software took on a professional look and sales immediately increased. Revenue that year payed off the initial development costs and was re-invested back into the software.

At the end of January 2007, automatic updates were introduced so that users could get the latest version of the software in seconds. Various concepts that are still with TSM were born. The concept of win/lose integers( Now win/lose strings !) being one of them. Several Lay Staking Plans were added. The Cosmetic look and feel of the program was tweaked and modernised. More indepth analysis was added. Additional Graphs were added.

In Febuary 2007 TSM had already been transformed and sales were gaining pace. Feedback continued as the software was fine tuned. In June 2007 the forum was added to the website. As a despiser of scam artists I wanted to make TSM more transparent. I was acutely aware that TSM could be seen to be one of the bad guys. Look in any betting forum and you will always find people who despise staking plans. “Level Stakes is ALL you need”, they say. Opinion is always subjective. The addition of the forum virtually erased any thoughts of scam. Here was real software, with real users, with a real person behind it. Feedback increased and further tweaks, features, staking plans were added over time.

In July 2007 TSM received a major update. Internal coding was improved and more analysis was added.

In January 2008 – the ability to parse data directly from the racing –index tipster proofing site was added to the main website. This was eventually restricted to access from within the TSM software only. At the time, any tipster on their database could be loaded into TSM with all their previous results exposed.

By April 2008 more staking plans had been added. More features such as filters added.

In January 2009 TSM added another bow to its strings. Automated Betting. By using 3rd party software – Gruss Betting Assistant – TSM users were able to place bets in the Betfair Betting Exchange to which ever staking plan they desired.

By July 2010 TSM is now the critics choice when it comes to researching betting systems. You will find references to TSM in most popular betting forums. It is also used by an increasing growing number of users to automate their betting. You will also find our staking plan descriptions on various websites. Often quoted to the word. (They think i don’t know !) Even the names to the staking plans that often i’ve had to make up are used.

Over the next few years TSM was updated to include more staking plans. The layout was modernised and refined and Automated Betting was improved.

In April 2013 the first version of the TSMapp was released. This was a browser based version of TSM that could be used on any computer and any device.

In July 2014 TSM Version 5 was released. This was a major release coinciding with Betfair updating their API.

In December 2016 TSMapp 4.9 was released. The App was coded with completely new software – https://wisej.com/ as the company behind the previous backend software folded.

In November 2018 the TSMapp was updated so that the layout matched TSM V6.0 as much as possible.

In January 2020 – TSM Version 7.0 was released. This update included a complete internal code overhaul. It also removed Automated Betting from the software.

Automated Betting was moved to its own specialist software called The Bet Machine. To find out more about The Bet Machine including a 7 day free trial head on over to the dedicated website. at https://thebetmachine.com

Each Way Level
Each Way Combined